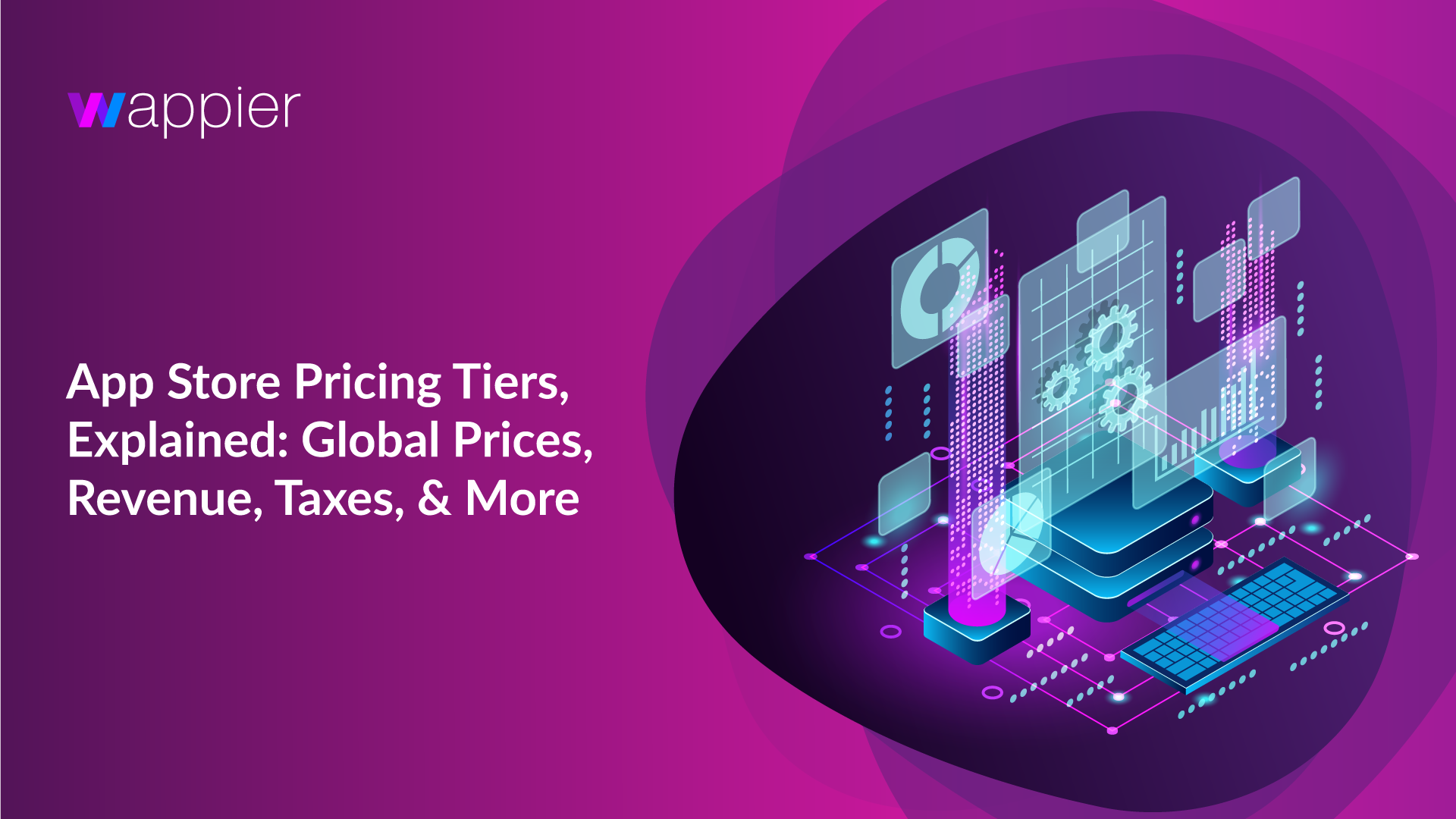 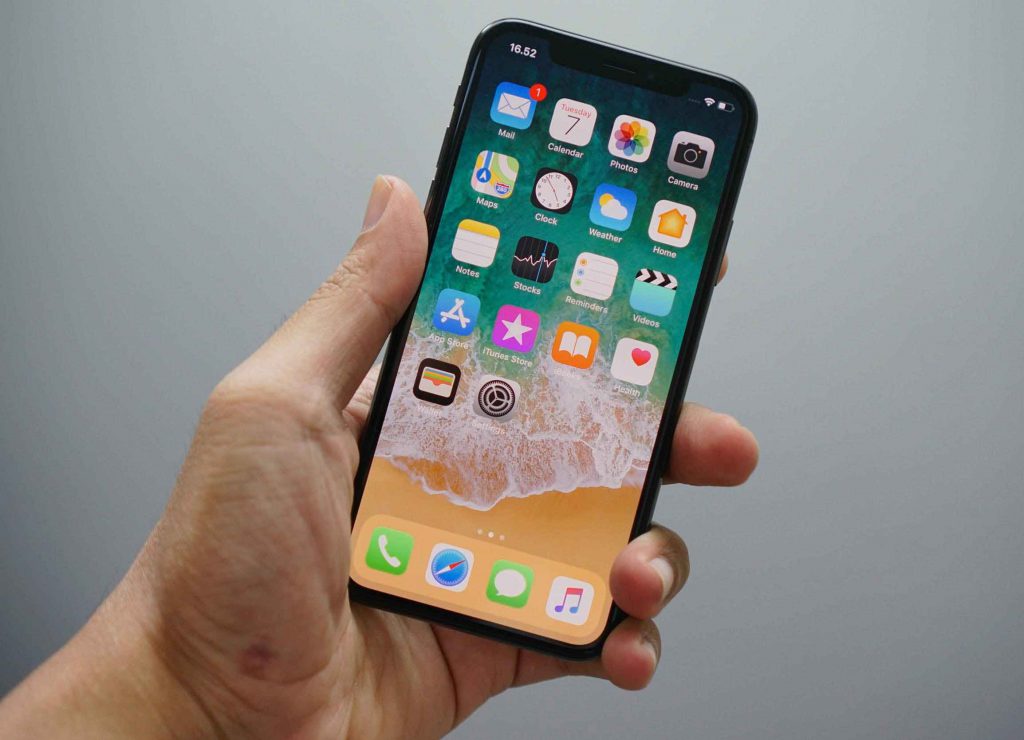 Thanks to App Store pricing tiers, Apple has been able to offer consistent payment experiences to customers around the world.

Apple’s App Store is one of the largest mobile storefronts in the world, rivaled only by Google Play in its scope. Many factors enabled Apple to corner this market — one being that it offers a consistent experience, right down to pricing. All developers must choose from a broad selection of App Store pricing tiers that determine in-app purchase costs. While these tiers don’t provide the same level of flexibility as the pricing policies on Google Play, they come with certain benefits that help iOS apps operate more effectively in the global app marketplace.

App Store Pricing Tiers: How do they work?

App Store pricing tiers apply to any transaction within Apple’s mobile ecosystem, including subscriptions, IAPs, and direct app purchases. Instead of assigning a specific price to a given product or service, developers choose from 94 tiers that represent transaction values starting at approximately $0.99. Apple currently supports two sets of price tiers:

Each tier includes a fixed value for every international currency supported by Apple. In doing so, price tiers automatically apply to every country where an app is available without any additional effort from the developer. For example, a Tier 10 purchase that costs $9.99 in the United States is valued at $13.99 in Canada, ¥68.00 in China, and €10,99 in Europe. 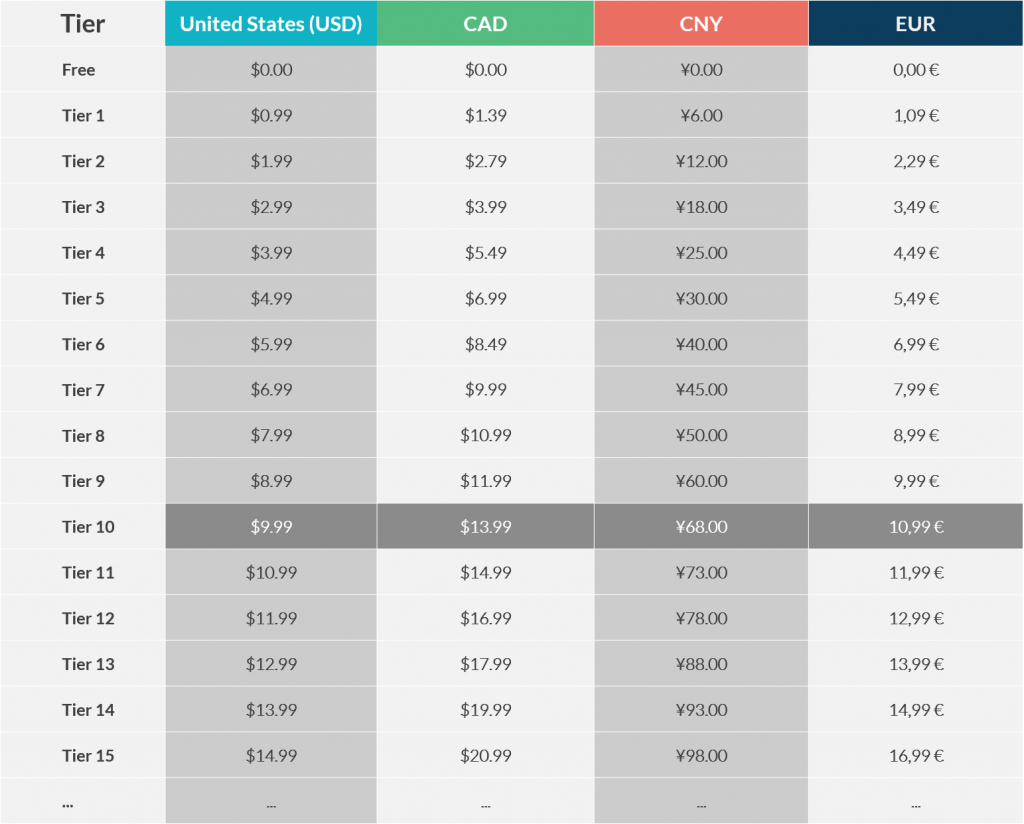 How does the App Store manage regional pricing?

It’s important to note that Apple assigns its App Store pricing tier values directly instead of using USD conversions. A developer who chooses Tier 1 grants its product a USD value of $0.99 and a JPY value of ¥120. The actual conversion rate between the two currencies at the time the IAP price is set is not taken into consideration.

The benefit of this effect is that prices remain constant despite market fluctuations. If a player completes the same IAP every week, that price will not fluctuate within their preferred currency. Apple will periodically revise these numbers to reflect any strengthening or weakening currencies, but these instances are rare and do not apply to the entire tier.

How do App Store pricing tiers handle taxes and revenue?

Along with currency and regional pricing, each tier outlines the developer’s profit for each transaction adjusting for Apple’s 30% share of revenue. In the United States, a single Tier 1 purchase worth $0.99 will award the developer $0.70. 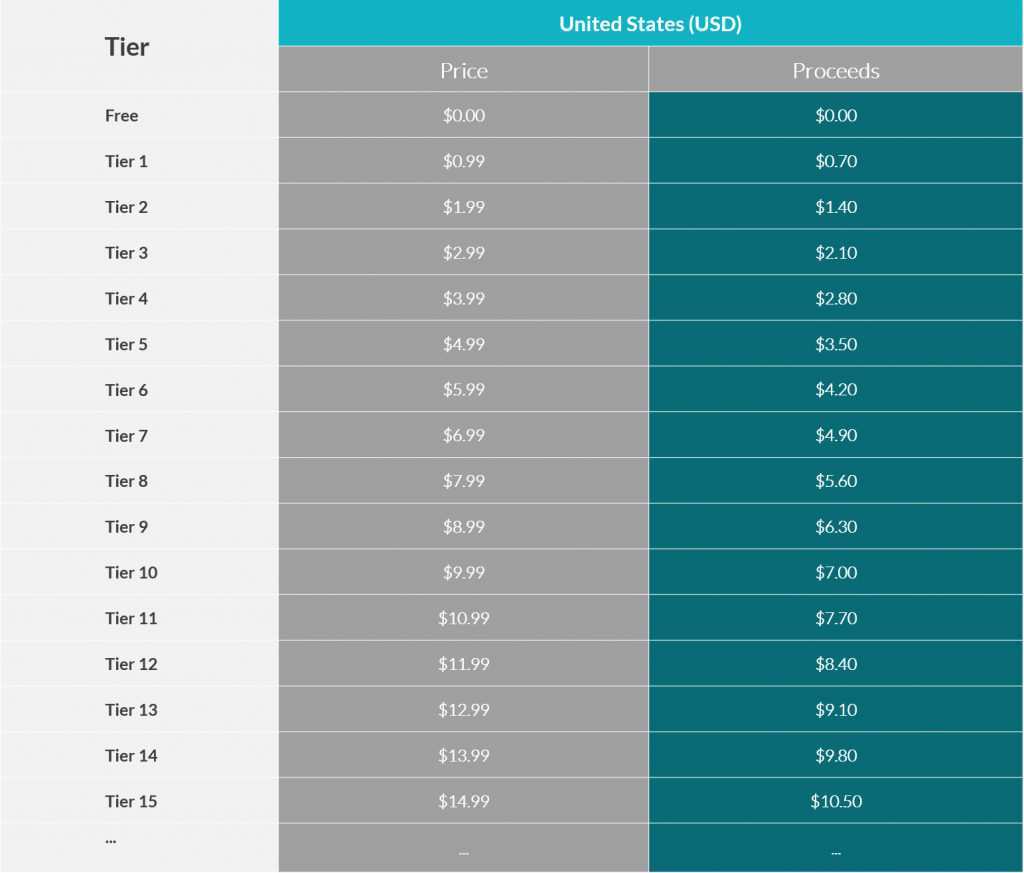 In countries where developers are automatically taxed for each digital transaction, App Store pricing tiers account for these figures. Europe provides an excellent example: While the region uses a fixed Tier 10 value of €10,99, developer revenue ranges from €6,58 in Luxembourg to €6,20 in Finland based on local tax policies.

What are alternate pricing tiers?

Along with the standard App Store pricing tiers, Apple supports seven alternate tiers. These are variants of standard pricing models that account for additional economic factors.

Alternate Tier A and Alternate Tier B were introduced to charge lower prices for customers in emerging mobile economies. Tier A, for example, is identical to Tier 1 for developed countries like the United States. Then-emerging nations like China, on the other hand, are listed at ¥1.00, rather than ¥6.00 as in the standard pricing tier. As such, it remains a popular option for attracting customers to low-cost purchases across both Eastern and Western markets.Alternate Tiers 1 to 5

Alternate Tiers 1 through 5 are attempts to “clean up” prices even further. While US prices remain unchanged, Apple rounds up the value of some other countries to present a consistent appearance in all currencies.

However, it’s worth noting that these conversion rates do not consistently account for psychological differences in value by region because these tiers are fixed, rather than dynamic. Luckily, developers can dynamically optimize global pricing using machine learning.

Working within the App Store pricing tiers is a reality of Apple’s ecosystem. The question for developers is which tier best suits each transaction.

Let’s say you’re developing a free-to-play app that supports a premium virtual currency. In most instances, you’ll want to offer a small volume of currency at a standard price alongside higher-value currency bundles. A simple breakdown might look something like this:

In this example, developers cannot assign these bundle discounts manually. Instead, they will need to choose tiers that reflect these values:

Alternately, developers could include a small amount of bonus virtual currency that increases with each bundle:

As you can see, there’s still a significant variety of options within Apple’s pricing structures. What’s needed is an optimal price point that will maximize revenue and engagement with your chosen audience. This is where wappier’s platform comes in — our pricing optimization engine calculates the ideal price for each audience segment empowering app developers to make informed decisions whether it is country-specific storefront pricing or targeted promotional offers.

If you’d like to see how wappier can help you navigate App Store pricing tiers, contact us today for a demo.

What Is Customer Sentiment?