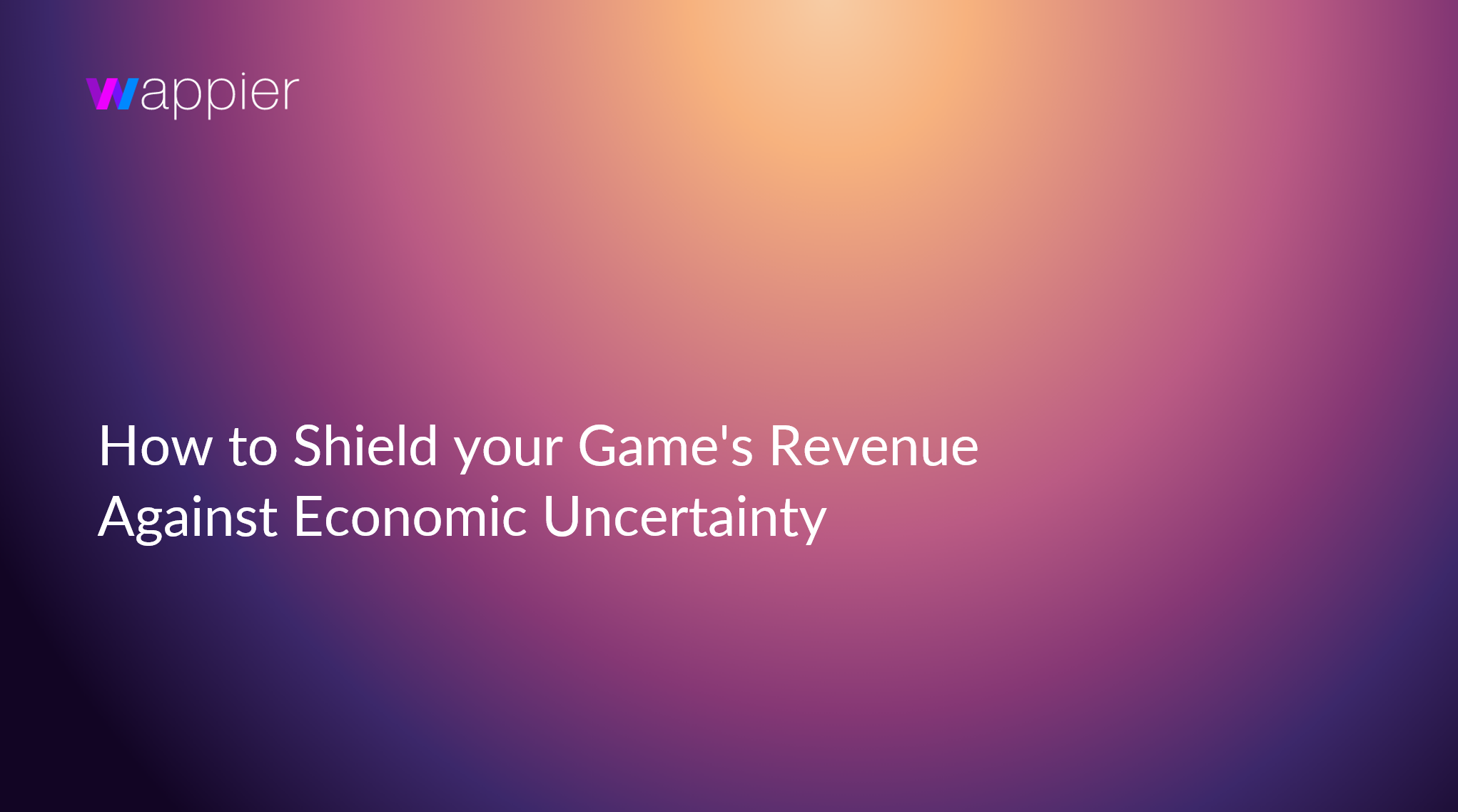 The ongoing global economic crisis has impacted everyone in one way or another. Consumers have had to tighten their belts, businesses have had to make difficult decisions in order to stay afloat, and mobile gaming companies have been feeling the effects as well. The rampant inflation, led by surging energy prices, has decreased the purchasing power of money and increased household expenses in Europe and the US.

This has led to a situation where publishers must decide to either raise prices to keep up with inflation or find creative ways to optimize their prices in order to get the attention of consumers who now have less purchasing power. They need to be careful with pricing in-app purchases (IAPs). They need to be attractive enough for players and still generate a healthy revenue stream for the publisher.

How can mobile game publishers leverage pricing to best protect their revenue against economic uncertainty?

A Booming Market with Decreased Revenues

More than half of the global game market’s revenue comes from the Google and Apple stores, where revenues have surpassed $100 billion and are expected to grow by +5% annually by 2022. Gaming giants are increasingly investing in and expanding their mobile gaming offerings because of the lucrative business opportunities and high profit margins.

And games in 2022 are going mobile at a very fast rate.

The biggest names in the industry have already announced new releases with a focus on social elements, experiments on the metaverse, the use of blockchain technology, and Play-to-Earn models. At the same time, more AAA titles, especially Battle Royale and FPS games like Call of Duty, are getting mobile versions. And on top of that, the growing trend of mergers and acquisitions is likely to continue! Their aim is to counteract the negative impact IDFA had on user acquisition campaigns, and to examine cross-game synergies that will help build stronger communities.

The recent global pandemic also sparked a period of economic uncertainty with a plethora of aftereffects. Adding insult to injury, Russia’s invasion of Ukraine stoked the flames of two major market forces: inflation led by rising energy prices and a volatile currency landscape. As a result, the global economy has been thrown into turmoil.

For example, inflation in the United States and the Euro area hit a four-decade high, exceeding 7.5% in March 2022, and the trend continued into April with no signs of relief. Energy prices followed suit, culminating in extreme fluctuations across gas, electricity, and fuel. In early March, the TTF Gas Futures European index reached 210 EUR/MWh; and as a result of the Russian invasion of Ukraine, US gasoline prices rose by 48% and fuel oil by 70%.

Figure 3 – Annual inflation rates in the EU by country

The situation is still developing. As wages in Europe and the United States continue to lag behind rising prices, sanctions against Russia further strain the energy markets. That strain can also be felt on household income, but unlike during the Covid lockdowns, it’s doubtful that central banks will use stimulus checks to alleviate the problem. Consumers are already tightening their belts, and even reducing their entertainment budget.

Here at wappier, we monitor prices and perform regression analyses as part of our Global Pricing Optimization Program to determine if price adjustments are necessary, and our ongoing model learning and algorithm retraining are key components of the program’s continuous price optimization approach. Below, we examined how inflation affects the economy of mobile games, and our constant monitoring of macroeconomic indicators led us to notice a rising trend in the consumer price index in several markets.

In simple words: we monitor the economy, so you don’t have to.

In that light, we performed a comprehensive analysis at the end of 2021 that included multiple titles that are live on our Global Pricing program. We wanted to find out how inflation affects games’ KPIs, including average revenue per user (ARPU), average transactions per user (ATPU), payer conversion rate (PC), and average revenue per paying user (ARPPU), so we ran a Pearson’s correlation coefficient model to examine the correlation between monthly KPIs and the overall inflation rate over the course of the year (Consumer’s Price Index – CPI). 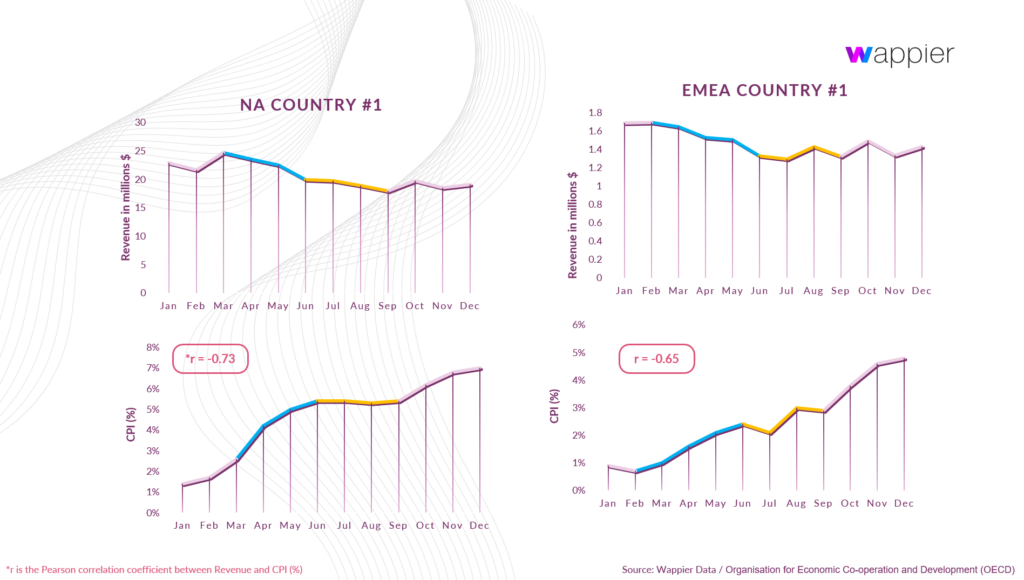 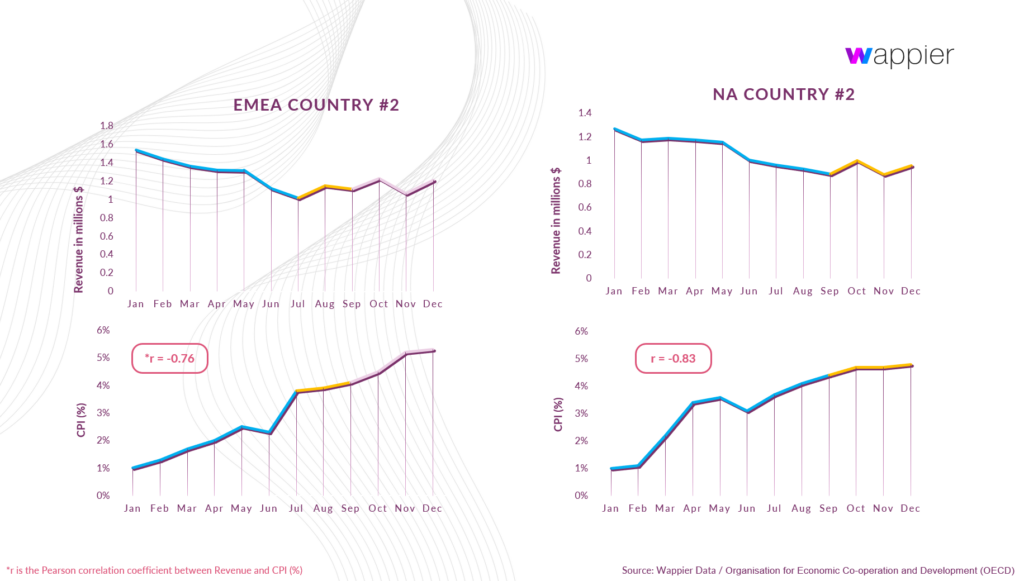 We found that inflation has an adverse impact on key performance indicators (KPIs) across games and countries. That is, a rise in the CPI causes a decrease in ARPU, ATPU, PC in a relative sense.

During the summer period, we ran a different experiment in which we selected groups of similar games and considered specific countries with high and low inflation. In our control group we included countries we are not pricing against comparable games in countries we have intervened.

The outcome showed that high-inflation EU countries (most notably: DE, FR, IT, NL.) responded with a spike in revenue where prices dropped and further lost revenue when the price when the prices were raised. On the other hand, countries with minimal inflation performed better with higher prices (most notably: AU, CH, HK, JP). Overall, our programs presented a better revenue growth rate of between 11% and 33% compared to high-inflation EU markets that were out of scope. *

*Please note that this is based on a small sample of games and countries, so scientifically proven to be facet

Mobile games are a perfect alternative to traditional forms of entertainment due to their accessibility and low cost. People, faced with pricey alternatives, tend to spend their money on games that they both enjoy and make sense of financially. What this means, essentially, is that games with proper pricing models will gain a competitive advantage and be able to attract more payers. Consumers may have more games to choose from, but they also have less money to spend on.

In a nutshell, an optimally priced game economy will act as a “substitute within the mispriced mobile gaming market”.

This is easier said than done. Game publishers will have to find new and creative ways of competing in an industry that becomes increasingly tougher. Creating more titles and adding more features might be enough to differentiate from the cacophony of mobile games existing in stores, but they do not guarantee optimal monetization.

Publishers will have to adjust their prices to attract more payers, drive transactions, and improve profitability due to the global economic squeeze on household income.

How can they do that without the hassle of having to figure out and apply the most optimal prices, across multiple markets and on a monthly basis for themselves?

How do you counter the effects of inflation?

In order to maintain your game’s economic stability in the face of inflation, you need a solution that can automatically adjust prices in your game according to informed data.

The proverbial battle for the consumer’s attention is not going anywhere anytime soon. Neither will economic uncertainty. How, then, can publishers determine the most cost-effective monthly price points for hundreds of SKUs across dozens of markets?

wappier automatically adjusts the optimal price for each in-app product in accordance with the specific country in which it is offered. This results in more paying customers, more transactions, and more revenue for you.

Global Pricing has helped some of the industry’s biggest names generate millions of dollars in additional revenue for their games. By adjusting prices every month for each country and keeping a constant eye on the latest macro and microeconomic developments, including inflation, we protect their game economies and safeguard their long-term success.

Mispriced SKUs/markets were already an issue before the pandemic. Can you really afford to not localize your prices?

How to Start Earning Mobile Game Ad Revenue in 2022